We discuss the top five games from each decade, the most important, genre defining or iconic titles that changed the face of gaming through history. For 'Part 1' we start with the 1970's.

Obviously, with any list like this, it is subjective and everyone will have their own opinions but here at SPOV it’s 'our house, our rules'! The criteria was simple, what game helped define a genre, influenced the industry or was just so good it still stands up today. What is perhaps harder is narrowing the list for each decade down to only five choices. Brutal? Yes. But it certainly sharpened the focus and caused a lot of discussions (aka arguments) here at SPOV.

Although we are starting in the 1970's we have to mention Spacewar!, generally considered to be the first computer game, created in 1962 by Harvard and MIT employees Martin Graetz, Steve Russell and Wayne Wiitanen. Designed to run on the DEC PDP-1 microcomputer and not commercially available, it was, however, shared between American academic institutions making it the first game to be distributed. The graphics and gameplay are obviously simple but it was a tone setter for what was to come and should be part of any list of this type. 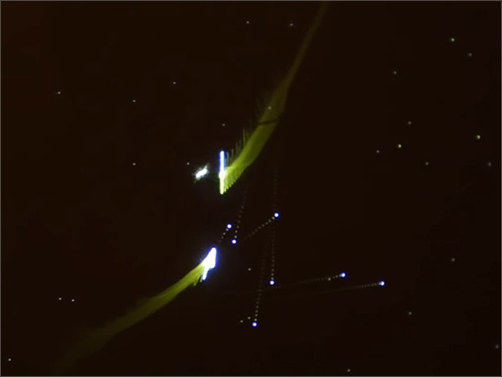 You needed a computer the size of a car to play it but Spacewar! was the first so should be near the top of any list!

Whether it's 'video', 'arcade' and 'computer', generally your use of the prefix can age you, but the progress is important. As games were only initially available in a public setting, they had to be shorter and quicker to play. The move by Atari to home consoles allowed games to be longer and more involved. If you still say 'video game' then you probably also say, 'that's not music' and 'you're not going out dressed like that', but the distinction is important.

In a time of pet rocks (yes that was a thing), nylon bed sheets, jumpers for goalposts and an avocado was only to be found in the colour of a bathroom suite, the explosion of computer gaming was a welcome relief.

It is also worth mentioning, each decade is not ranked in order of importance, that comes later as we compile the 'Top 5 computer games of all time'.

This title has to be near the top of any list or countdown of this type. Originally released as an arcade game, Pong was a huge commercial success for Atari, spawning many copies and clones and arguably copying the idea from the Magnavox Odyssey (the first home video game console), this extremely simple idea based around tennis proved to be an international hit.

It has been credited with launching the arcade phenomenon and is possibly one of the most important games of all time because of the effect it had on the industry and the people who played it.

Probably one of the most iconic games titles to this day, SPACE INVADERS holds a place in every gamers heart. Along with PONG the golden age of arcade gaming starts with these titles and this simple yet addictive 2D shooter has been described as one of the most influential games of all time.

Created by Tomohiro Nishikado, who was inspired by Star Wars (released in 1977) and the game Breakout, SPACE INVADERS was one of the first 2D shooters. No one who has played it can forget it's four note soundtrack that increased in pace (along with your heartbeat) as the game progresses.

Knocking SPACE INVADERS from the top spot on it's release in 1979, ASTEROIDS was an instant arcade hit for ATARI. Conceived by Lyle Rains and Ed Logg, SPACWAR! and SPACE INVADERS were an obvious inspiration.

You control a simple triangular ship that has to destroy flying saucers and asteroids (obviously), that when destroyed break into more pieces that can destroy your ship. ASTEROIDS was also one of the first arcade games to log the initials of players and it's original control dynamics made this simple game an instant hit.

The comparison with PONG is clear but by flipping the gameplay by 90 degrees and adding rows of bricks to be destroyed by a bouncing ball Atari had another arcade hit on their hands.

Designed by Nolan Bushnell and Steve Bristow, Steve Wozniak (yes, that guy) was called on to help with the hardware and later credited his involvement with the project as a major influence on his design for the Apple II.

The first ever coin operated arcade game was designed and created by Nolan Bushnell and Ted Dabney, this title also became the first commercially available video game making its place in the history books assured. COMPUTER SPACE is a space combat game derived from SPACEWAR!, for the gameplay think ASTEROIDS but without the asteroids. Using Newtonian mechanics many users found the controls difficult to master as they had to turn the ship to thrust in the opposite direction to slow down or stop.

Interesting fact, a COMPUTER SPACE cabinet can be seen in the 1975 movie, 'Jaws'.

That completes our journey through the 70's, things will now start to get much harder as we deal with the 1980's as there are so many more titles to consider, with the explosion of home consoles and manufacturers competing for a slice of the quickly expanding games market.

GAMES WE ARE PLAYING